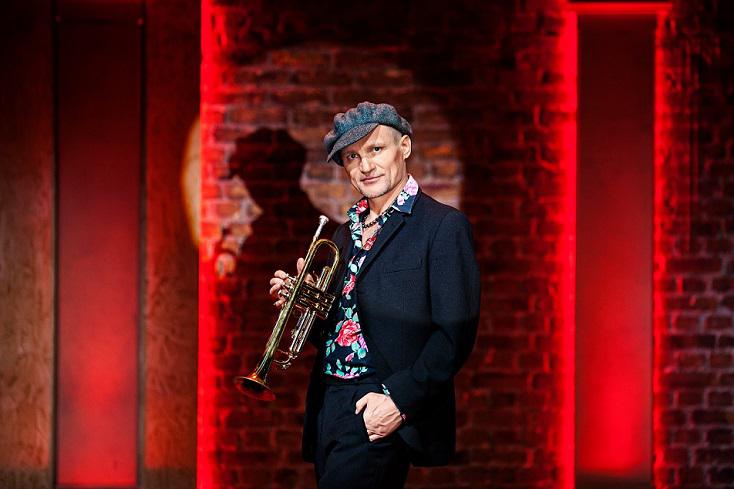 Oleg Skrypka Jazz Cabaret is an artistic show at the crossroads of retro jazz, Ukrainian lyrics, French chanson and rock’n’roll

The project was born when Oleg and his friends-musicians were fascinated by the restoration and restoration of records of Ukrainian jazz at the beginning of the 20th century. As a result, the singer album “The Jorgina” was released on the basis of the works of Bogdan Vesolovsky, a composer who lived in Lviv in the 30’s and 40’s of the 20th century.

The music of a peculiar “light genre”, which was then danced by young people, was gentle, sentimental at the same time as living humor. The unique rarities of music were given to Oleg by the Canadian diaspora. After all, it was in Canada that Vesolowski emigrated because of political persecution. Then the charming music of the composer was very popular. He was an active participant of the jazz-chapel of Yablonsky, who played at all evening parties of Lviv and other cities.

Oleg Skrypka performed restoration and digitization of records, since the materials given to him for many years did not sound for the general public. The restored arrangement and author’s performance of these songs by Oleg Skrypka immerse the listener in the atmosphere of the Ukrainian city of the beginning of the century, excite sweet nostalgia for the romantic past.

“The retro style in which this album is made is a beautiful high-end monument. Jazz, tango, foxtrot, swing – usually considered European and overseas genres. Instead, I hereby certify this rich, unique and high-quality musical history of Ukraine “, – says Oleg Skrypka.

While working on the album from the easy hand Oleg Skrypka, a new musical band – jazz band Zabava – was born. This is a full-bodied version of the orchestra of soloists-virtuosos, a kind of Ukrainian “all star band” from the best domestic jazz and rock musicians.

The most notable and successful project in the jazz-cabaret style is “The Great French Evenings”. The French chanson, which became their musical basis, is an opportunity to touch an elegant and sophisticated dreams. This dream is a high French culture that enriched the world with the creativity of Renoir, Edith Piaf, Patricia Kaas…

This artistic project opens to the public the charm of French musical history, unites those whose hearts fade from thinking about the homeland of exquisite fashion, cabaret and champagne…

Oleg Skrypka performs French-language hits in unexpected interpretations at concerts in jazz-cabaret style. Feminist march “Rien De Rien”, “Tombe la neige”, “Padam, Padam” and many others. Special arrangements of these compositions immerse students into the atmosphere of the Parisian artistic district. Allows you to feel the breath of Montmartre, to see the flare ups of the evening Seine, to feel the color of street music from the Champs Elysees.

“Century years ago, the cabaret was an analogue of the current fashion clubs. Their musical component harmoniously combines traditional jazz, city romance and operetta. Later, within the framework of the genre, the aesthetics of Broadway musicals, various erotic shows and even rock’n’roll emerged, because the tradition of “dancing on the tables” came from the cabaret, – says Oleg Skrypka. – That is why today, at the time of the crazy eclecticism, it seemed to me extremely interesting to try to revive this genre in contemporary musical forms. We launched the world tradition of jazz-cabaret evenings in Ukraine, where the atmosphere of openness, elegance and chic prevails. This cultural oasis will satisfy the aesthetic thirst for fans of the soul song, all those who have the perfect taste and style.”